1736 — The first Meetinghouse was located on Keene’s Main Street and Mr. Jacob Bacon accepted a call as preacher, with the stipulation that a yearly supply of firewood be delivered to his door. The building was burned to the ground in 1747 along with most of the buildings in Keene. The Second Meetinghouse was built in 1753, described as a “temporary affair of slabs with a wood floor.” 1754 — Construction for the third Meetinghouse began where the Soldiers Monument now stands and was completed in 1760.

1788 — The First Congregational Church (UCC-Keene) that we see today was built as the fourth meetinghouse in Keene, financed in part by the sale of pews. It housed church, community center, and town offices. The 70-foot-high steeple faced west, and the sanctuary had box pews, a “wine glass” pulpit, and galleries on three sides. The exterior was painted white and yellow, the large outside door was painted green, with a flat stone as the doorstep.

1788 — As the Keene representative at the NH Convention in Concord, NH, Rev. Aaron Hall voted in the affirmative to ratify the US Constitution. NH’s ratification provided the necessary two-thirds support to make the Constitution law.

1799 — A memorial service was held in December on the occasion of George Washington’s death.

1815 — The Ladies Reading Circle formed a Sabbath School and a charity program preparing woolen goods for the town’s poor.

1826 — This was the last year the town of Keene paid the salary for the minister of the First Congregational Church, ending a “Standing Order,” as conceived by the Puritans. 1827 — Congregational minister, Rev. Zedekiah Barstow, led a temperance group, the Association of Keene for Discouraging the Use of Ardent Spirits. He served as Pastor and Interim Pastor until his death in 1873, 55 years to the day he preached his first sermon.

1827 — 29 ladies formed a NH Bible Association and supplied scriptures to families, hotels, and the jail.

1828 — The Church building was turned to face south and moved on rollers 70 feet to its current location to make room for Central Square, and was renovated with a new front and steeple. Until this year, the First Church had the only bell in town, which was used to signal meetings, celebrations, and alarm. 1860 — Building was raised one story, with a vestry floor built underneath. The Sanctuary was enlarged, the rosewood pulpit was created, and a pipe organ was installed. The steeple was extended, and clock dials added. The Corinthian facade and steeple were relatively unchanged since that time.

1861 — New Testaments were given to 98 solders leaving for the Civil war. Church women, led by the Ladies’ Charitable Society, held fairs and fundraisers to send shirts, bandages, and supplies to the troops. 1865 — A memorial service was held in April, as word was received of the assassination of President Abraham Lincoln.

1869 — The 2nd Congregational Church formed from the congregation that was too big for the sanctuary and built their new structure on Court Street.

1895 — The common cup at communion was abandoned in favor of individual cups, as changing times reflected the need to be more germ conscious. 1925 — Erection and dedication of a two-story brick Parish House, with storage rooms, a billiard room and two bowling alleys on the lower floor, and a Ladies’ Parlor, classrooms, and a kitchen on the main floor. 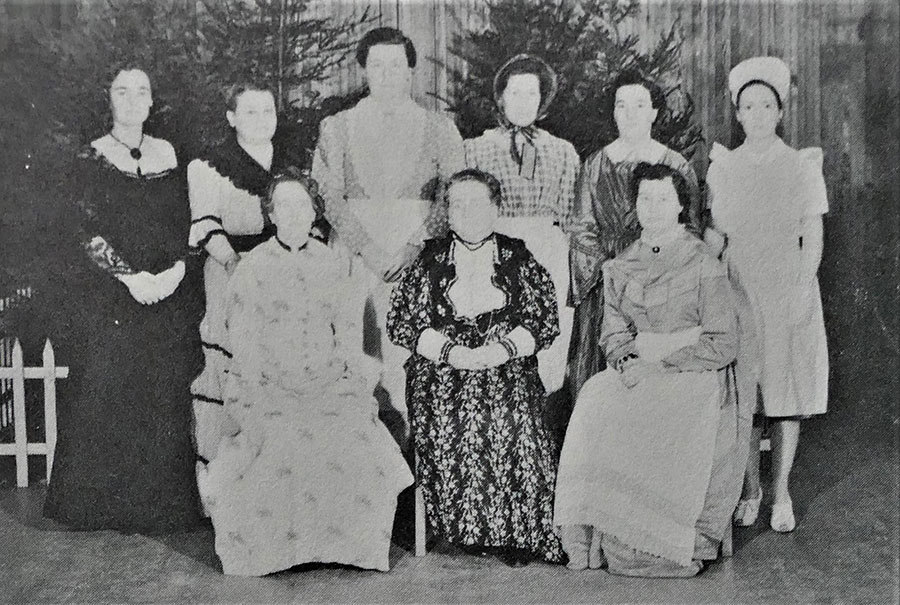 1925 — Three women’s groups—the Home Circle, the Foreign Missionary Society, and the Every Day Club— united to form the Women’s Society, “to promote Christian fellowship among the women of the Parish and to deepen the interest in the work of the Church.” 1938 — In September, the steeple crashed through the roof and landed in the balcony during Hurricane of 1938. There is no record of anyone being injured.

1938 — In October, the 200th anniversary was observed with special sermons and music.

1943 — First of a series of air raid drills and blackouts were observed from the steeple of First Church, all while hoping a full moon wouldn’t disclose the prominent white steeple.

1944 — Letters, packages, and local newspapers were sent before Christmas to 80 members in uniform.

1949 — Mr. and Mrs. Club held a turkey supper and turned the proceeds over to the Church Improvement Fund.

1949 — Building improvements included the addition of fire escapes and exit signs in the Parish House to “better conform with existing fire laws.”

1951 — A memorial cross was donated anonymously and hung behind the pulpit. 1951 — The Men’s Club held a Fathers and Sons Banquet in May, attended by 130 men and boys and voted to become an annual event.

1951 — Jonathan Daniels submitted a report of the activities of the Crusaders for Christ, including delivering toys, food, and clothing to a needy family. 1952 — Church parlor was redecorated by the Women’s Society.

1960 — Parish House was expanded with a third story for Sunday School and youth activities, and other building alterations formed new offices, library, and chapel. A week-long celebration of the expansion program began with Rally Day.

1961 — Support was given to establishing the campus ministry at Keene State College.

1965 — The Board of Deaconesses helped provide a television and the Keene Evening Sentinel to shut-ins, and “hope we have made our Church a friendly church.”

1968 — Women’s Fellowship gave $1,000 toward the purchase of the property which became the Elsie Priest Park. 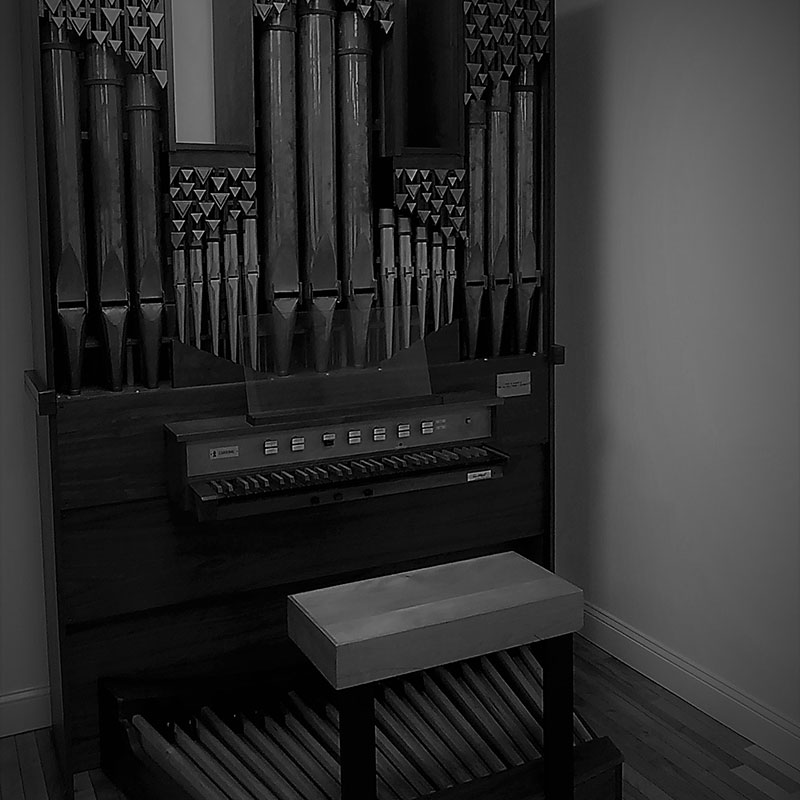 1973 — A national energy crisis meant changes to the Church, including such measures as curtailing use of the building by outside groups, and discontinuing two-thirds of the nighttime steeple lighting.

1974 — Sisters Grace Prentiss and Edda Beal donated a small Cardinal pipe organ in memory of their parents. The instrument was installed in the Chapel.

1976 — The Mr. And Mrs. Club, a social club with monthly supper meetings, changed its name to The United Supper Club, to indicate that all persons should feel free to join the group.

1977 — The annual Christmas fair, “A Holiday Express,” was recognized, not for its dollar value ($3,500 profit), but for the greater value of comradeship. “Grandmothers worked beside young mothers with new babies, and all ages in between, and a good time was had by all.”

1982 — United Church of Christ in Keene was listed on the National Register of Historic Places.

1987 — 15 students were confirmed, following a year’s study and two retreats. Each student received a handmade stole.

1988 — 250th Anniversary was observed with a Block Party and barbecue, an anniversary banquet, living history interviews, and the first performance of the winning composition in the national hymn-writing contest, James Biery’s “Grant Us Your Presence.”

1989 — Mission Action Board presented the first of many SERRV (Sales Exchange for Refugee Rehabilitation Vocations) tables of crafts from people in developing nations.

1989 — 39 campers from Keene headed for the hills, at Horton Center, on Pine Mountain in Gorham, NH.

1989 — A community “Messiah Sing” inaugurated the Christmas season in December and became an annual musical tradition.

1991 — A Fall-for-the-Arts exhibit of works by UCC parishioners was held in the parlor in September.

1992 — In March, a piece of decorative cornice fell from the ceiling during morning worship, leading to an engineering study and the closing of the Sanctuary for an extended period of repair. Worship services were held in the Parlor, live radio broadcasts continued.

1994 — The youth mission trip destination was the Detroit/Windsor Refugee Coalition. In addition to building shelves and making repairs, they learned of the crisis in Rwanda and the needs of the refugees.

1994 — Lightning caused major damage to the pipe organ’s electronic relay. The instrument remained in use for Sunday services and weddings, minus some subtlety and finesse. 1997 — A global partnership with Mt. Selinda church in Zimbabwe was begun.

1998 — A Refugee Resettlement Committee was formed to sponsor and welcome the Jovics, two Bosnian siblings.

1999 — The Senior Choir closed out the century with one of their low-key parties in the Dining Room. 2000 — The Millennium Build project provided labor and funds for a home for a family in Swanzey through Habitat for Humanity.

2001 — A Bosnian refugee family, the Kmetas, arrived in February, with ongoing support of the Refugee Resettlement Committee and Mission Action Committee.

2001 — An evening service of scripture and prayer was held on September 11, in response to the attack on the World Trade Center. 2004 — The Parlor Redecoration Committee of the Women’s Fellowship completed its selection of new fabrics and furniture, with monies earned at two successful rummage sales.

2005 — Capital campaign, That All May Come, raised $1.2 million to install an elevator and improve accessibility within the building. 2005 — “Godspell” raised more than $8,000 for That All May Come, and forged great bonds within the Church and community. 2006 — This year the mission trip was for adults, who joined members from other local churches and travelled to Slidell, LA, to build homes with Habitat for Humanity in the wake of Hurricane Katrina.

2007 — Our adult Mission volunteers traveled to Washington DC, where they prepared boxes meals at the DC Central Kitchen, served breakfast at SOME (So Others Might Eat), packed food boxes at the Capital Area Food Bank, and moved mattresses at The Open Door Shelter for Women. 2008 — Mexico was the destination this year, where volunteers stayed at a Catholic convent and visited multiple places where the Sisters served. They celebrated the Day of the Dead at mass in the town cemetery and visited local homes prepared for the souls of loved ones who passed that year. 2010 — Youth Group’s Pasta Dinner was a huge success, with extra chairs added to each seating and $4,000 raised for mission trip to Los Angeles.

2010 — Sacred Circles of Discipleship, small group meetings held during Lent, started a spiritual journey that continues to the present. 2011 — Our Open and Affirming presence became aligned with the national UCC, honoring an ongoing commitment of active support for LGBTQ+ issues in our community.

2012 — Youth group went to Puerto Rico and found new opportunities to serve. Next trip will be to New Orleans, through partnership with the UCC Disaster Relief Ministries. 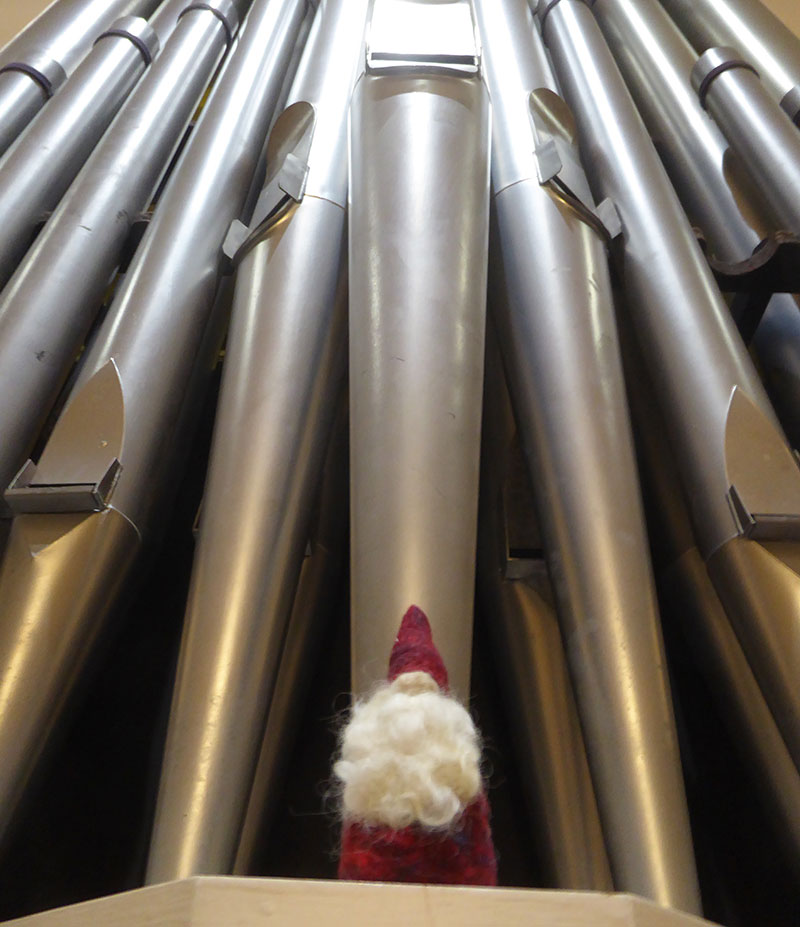 2013 — Sunday school children participated in a multi-media “Walk Through Holy Week” on Palm Sunday, for a modern-day look at Jesus’ last week on earth.

2013 — 275th Anniversary of the Church. Celebrated with special concerts, a dinner and silent auction, a Colonial-costumed Thanksgiving service, and guest preachers, including Bob Chitombo from our sister church in Mt. Selinda, Zimbabwe.

2014 — Overflow shelter space was opened for up to 12 guests from One Hundred Nights Shelter, December through March, with a Shelter representative and Church member in attendance each night. 2017 — The Blessing of the Animals was held in the Elsie Priest Park, and a variety of pets lined up for their blessing.

2018 — The Chapel, East Room, Nursery and Church School were renovated on the 1st Floor, and Maps Counseling Services renovated and took residence on third floor of the Parish House. 2019 — Our choir joined with the Chamber Chorus of our partner city in Einbeck, Germany, and the Keene State and Keene High choirs for an unforgettable blending of voices. 2021 — Worship services resumed in person, with a masked and socially distanced congregation and choir. 2022 — The organ was once again struck by lightning, leading to months with a temporary keyboard and waiting as the increasingly digitized instrument once again needed repairing, restoring, and tuning.

2022 — Blessing of the Animals resumed in the renovated Elsie Priest Park. Let's get in touch

Give us a call or fill in the form below and we will contact you. We endeavor to answer all inquiries within 24 hours on business days.